Does the internet really need another article about a ‘Souls’ game, the gameplay connected series that has spawned it’s own subgenre? Of course not but I am late to the party, so thought I would add my two cents (which is odd since I’m British and don’t understand the currency terminology).

It’s hard to think of a gaming series that has had such an impact on the gaming lexicon as the Souls series (by that I mean, Demon Souls on PS3, Dark Souls 1-3 and Bloodborne on the PS4). Any game you can’t waltz through it is now ‘Souls’ like be it a Souls clone or any other genre. I’ve even seen some comments that the Crash Bandicoot remaster were ‘Souls’ like because the game was not particularly forgiving.

I’m not a great gamer. I suck competitively so instead, I try to find solace in some meagre single player glories but these are often hard fought. I’d had countless people tell me I should try Dark Souls or Bloodborne and I’d waved it away because each recommendation was followed by the comment, ‘it’s really hard though’. I had a feeling this was a little bit of gaming schadenfreude or a gaming STD – gamers with a perverse joy in seeing people go through the same irritation and pain that they had suffered.

For that reason, I stayed away.

However, over time, a sense of curiosity developed. I spent so much time gaming, calling myself a gamer, how had I not played an infamous Souls game? Call yourself a real gamer? Not until you have chugged an Estus flask or reclaimed your Blood Echoes from a former foe surely. In top of that, I needed to know… was I good enough?

For those that aren’t aware, there is a central gameplay mechanic to a Souls game. You progress but can only save at certain points. Death means you start from the last save point BUT all the enemies also respawn. As you kill an enemy, you gain level up points that can be used for character/weapon upgrades but if you die, you lose them. However, if you save, enemies respawn. If you do lose them, you can backtrack and find the level up points but die again and they are lost forever. Every enemy can kill you quickly if you let them. The level design can be fiendish and there are a generous smattering of controller breaking boss fights in for good measure. There is also a vague but interesting element of lore to be discovered within the game and lots of environmental storytelling.

I love a good bit of gothic storytelling, and after watching a video by the excellent Super Bunny Hop, I’d seen all about the Lovecraftian elements to Bloodborne. So I took a punt on a cheap copy from Ebay and started Bloodborne.

It took me several gaming sessions to get through part of the first level and defeat the first boss. As soon as I finished that boss, I struggled through the rest of the first level and had to beat the second boss. All in all, I put a good few hours into getting a small percentage of the way through the game. Ordinarily, this would be the time I would turn off the console, stick the game at the back of the cupboard and pretend to everyone that I hadn’t and it ‘really wasn’t my thing’. I don’t have much time to game and this was clearly going to become a time sink of epic proportions. 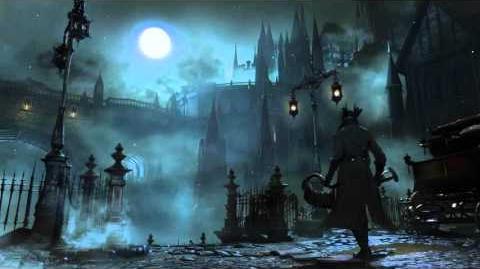 I wasn’t very good. Clearly. I had made little progress in real terms but I FELT like I had climbed a mountain. Souls gamers always go on about a sense of achievement, which privately I had written off as pretension bum talking but lo and behold, I felt it. I played further. I continued to suck. I found bosses that made me tear my hair out. I played it every day and I went to bed having uneasy dreams of monsters and red gothic typeset telling me I had died. I leveled up, did some grinding. I read fan theories on the lore online and watched videos on boss fights. Rather than feel I was cheating, I felt like I was part of a community. I could watch boss fight theories but every player recommended a different tactic and I still had to do it myself. I eventually got to the end after fifty or so hours and beat the final hidden boss (I didn’t go back to the DLC but I’ll come to that).

I felt good but at first, this victory didn’t come without problems, and not just my normal erectile dysfunctions. I could not stick to a new game. I started several more games but felt little impulse to go back to them. I managed some shorter games but there was a hole in my life. At the same time, I didn’t want another Souls game. Eventually though, I got back into the rhythm and picked up more games but I realised I had changed as a gamer. All those hours of frustration had given me a new skill set that was sorely lacking in my repertoire. Patience and acceptance.

You see, I had always been an inpatient gamer. I would get frustrated at death, particularly in boss fights or against difficult levels. I might turn off the game or just get more and more wound up. I still do that of course, my other half can bemusingly attest to that. Winning was a war of attrition. Perseverance trumping skill or anything like it. I had a theory that enemies, after a number of deaths, got as bored by the whole thing as me and would let me put them out of their misery.

After Bloodborne though, I had learnt to take a step back and see death as a learning experience. I now take a deep breath and realise that more often than not, I am the problem. I had died for a reason i.e. I was shite and needed to not make the same mistake again. I needed to level up or I needed to use the right weapon, combo, etc. There was a reason other than the game being a bastard and me being faultless.

Unlike many games, Bloodborne left me with skills that survived that one game and that is pretty rare. I mean, sure the more you play shooters, the better you tend to get but that is gradual and not noticeable. This game made me play differently and at the heart of it, I think that is why people are so fond of them.

Up next is the Dark Souls remaster this year and, another playthrough of Bloodborne. Why, I hear you ask? Well, I want to play the DLC and get the 100% platinum trophy and being the tight arse I am, I had managed to buy a cheap copy on ebay that was actually from the US and won’t work with UK online content, like the DLC. For now though, I can wear my Souls badge with pride. Just don’t ask me how many times I had to fight the big vaginal tentacle monster Ebrietas.

@Octav1usKing Well this is poo news for a Tuesday morning. What I have seen & heard of the trolling is appalling. Why anyone would do something so horrendous against content that was meant to be fun & silly is beyond comprehension. Why would anyone want to continue in the face of such hatred?
View on Twitter
0
1
Follow @Jambags_UK

Jambags
With E3 losing attendees quicker than ever, it reminds us of the time we sent one of our hosts to watch Keanu Reeves at the Microsoft E3 presentation... simply breathtaking. If you like what you hear, check out our monthly podcast @Spotify, Apple Podcast and all good apps!